How to Promote Yourself Authentically to Gain New Opportunities 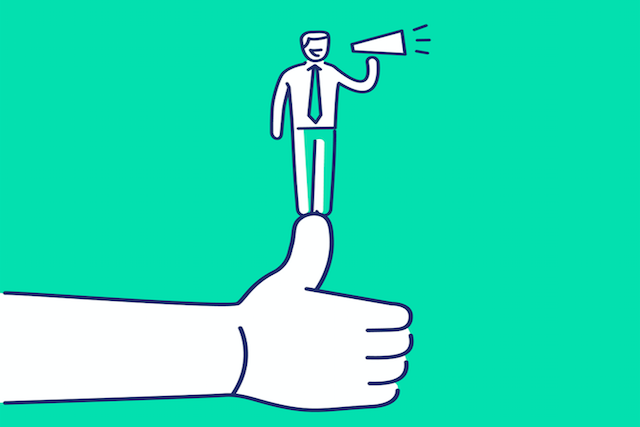 “If you really put a small value upon yourself, rest assured that the world will not raise your price.” ~Unknown

I have always been a smart, dedicated, hard working person. I was raised to believe that those were characteristics required for success. So imagine my surprise to reach the working world and find unexceptional colleagues getting promoted above me.

There’s one memory that particularly stands out.

When I was twenty-five, I was on a team that consisted of amazingly smart, ambitious, hardworking people, plus one mediocre guy, Tom. His mediocrity stood out amongst a high-achieving team, but Tom thought he was a rock star.

Infuriatingly, all the right people noticed Tom. And they didn’t notice me.

In hindsight, the biggest difference between Tom and I was our mindset around self-promotion. We were both ambitious, but he was willing to push for it. Meanwhile, I was waiting patiently for my turn.

I couldn’t get past the idea that self-promotion was sleazy, manipulative, or desperate, so I refused to do it. I didn’t go into a meeting with sweaty palms ready to ask for the promotion that I wanted. I just did nothing.

I waited and hoped that someone would notice how hardworking and deserving I was. But it never happened. I lost out on opportunities that would’ve helped me make a bigger difference and feel more fulfilled in my work because I refused to raise my hand.

Now, I’ve built my career on my skill for authentic self-promotion and have found tactics to promote myself in ways that feel in perfect alignment with who I am. These are the things I’ve learned along the way. I hope these work for you, whether you work for yourself or have a traditional job.

You can probably picture the kind of person that you don’t want to be when you’re promoting yourself. But do you know whom you do want to model your self-promotional behaviors after?

Look out for examples of people that promote themselves with honesty, integrity, and personality.

One of my role models once told me a story about going to a networking dinner and being pestered by someone who wanted her to quit her job and come join his company.

When her boss asked how the networking event was, she said: “It went well. I got offered three jobs. Actually, I got offered the same job three times. See how in-demand I am?”

She told me that it felt like a light-hearted way for her to tell him that she’s highly sought after. It both matched her cheeky personality and how they usually interacted with each other every day. If she tried to do it any other way, it would have seemed awkward and insincere.

Your mindset around self-promotion will dramatically change once you start looking for positive examples of people who practice authentic self-promotion. You’ll be surprised how many role models you can find.

2. Remind yourself how self-promotion can help you make a difference.

Self-promotion has a bad reputation for being egotistical. But it’s only egotistical if you’re solely focused on what it can do for you. Try focusing on how it allows you to help more people.

How many more people will you be able to help if you promote yourself and more people discover your work?

How will landing this new job or client help you make a bigger contribution to the project?

Getting the job or landing the client gives you the opportunity to change their lives or business for the better.

Thinking about how your work makes a difference takes the focus off you so that you feel less egotistical and reminds you that your work (no matter how menial you may think it is) helps others.

3. Realize that no one else is paying as much attention as you are.

In the past, I believed that if I truly deserved that new opportunity, then the people in charge would have already offered it to me. But that’s rarely true.

They have a lot on their to-do list and it’s easy for them to forget everything that you do. That’s why you need to regularly remind them, whether it’s a boss or a client.

All it takes is getting into the habit of a quick knock on the door to say, “I just wrapped up that project and wanted to let you know about the great feedback we’ve had so far.” It can be casual, honest, and low pressure. Don’t be afraid to let them see how valuable you are.

4. Ask yourself how satisfied you are with your work right now.

Feeling the need to raise your hand for new opportunities is a sign that there’s something missing from your current work. By raising your hand and advocating for yourself, you have an opportunity to find greater fulfillment in your career with minimal effort.

Ask yourself: what kind of projects would bring me more job satisfaction? Then, proactively ask for those projects.

Employers love it when their employees are engaged and fulfilled by their work, so there’s a good chance they’ll want to hear what you have to say. It’s helpful to you and it’s helpful to them.

I noticed that one thing that I disliked about self-promotion was feeling like I was asking for more than I was offering. It dramatically lowered my confidence and triggered the quivering, insecure voice that’s a dead giveaway that I’m nervous and unsure.

Now, before I even start on the path toward authentic self-promotion, I get clear on what I want and what I will bring to the table that is of equal or greater value than what I’m asking for.

It removes the feeling of powerlessness and helps give me confidence that I’m making a difference with my contribution. Even better, it means that I can easily explain how I’ll make a positive impact for my boss or client.

6. Notice what your fear of self-promotion is masking.

Your fear of self-promotion masks something much bigger. It could be fear of success, failure, judgment, or not being good enough. You’re not afraid of self-promotion itself; you’re actually afraid that if you promote yourself and it doesn’t go well, it’ll prove that your real fear is true.

For me, I’m usually afraid that I’m not good enough to get that big project or land that new client. If I raise my hand, promote myself and get rejected, it can feel like evidence that proves my fear—I truly wasn’t good enough.

What is the underlying fear for you? Where does that come from? When you dig deep into what the fear truly is, you can start to question its validity and build your personal growth muscles.